A Need To Know

With the arrest of Angel Jess Santos, one of the alleged perpetrators of the rape of the Kagman girl, there's been a demand for more information, more accountability on what's being done by law enforcement here in Saipan. The other two alleged perpetrators remain at large. We have heard nothing yet on arrests for the rape of the girl in CK. We are waiting on other cases, too.

There is no internet access to the names on the sex offender registry; DPS only posts general information about this supposed enforcement tool. Wendy discusses the need for this to be made public and available to all in a recent blog post. We should be demanding better response from our DPS on this.

Without the registry, it's hard for the public to keep track.

This would be an excellent topic for a series of articles by the newspapers. They could list the names of all arrested for sex abuse, sexual molestation, statutory rape, rape and assaults with intent to molest or rape--by year, giving the charges made. They could let us know who was convicted, what cases are still pending, and what cases are over without convictions. They could let us know if cases were mishandled or dropped or dismissed. They could do a study of sentences handed out to those convicted. They could tell us who's still in jail and who is out--and what role parole played in the release of sex offenders. They could focus on sex abuse of minors. Or they could feature different types of sex abuse each day. We've got plenty to go around here in Saipan.

They could talk with experts about what parents and teachers should do to teach their sons to respect girls and women; what they should do to help girls stay safe and demand the respect they are entitled to.

They could talk with CHC officials about what a victim may experience once at the hospital. And tell us if the rumors that there are no unexpired DNA kits in Saipan is true or not. Besides getting evidence and taking care of physical injuries, what help is available to the victim?

There's a good start on the names of Saipan's pedophiles and alleged perpetrators/pedophiles at the Isa Drive blog. It only included 52 names. In April 2009, DPS said they had 122 names on their sex offender registry.

But we need investigative journalism. The 4th estate is essential to preserve our liberty. And being able to be a child and be free from molestation, to be a teen and walk to and from school without being raped, these are are essential aspects of liberty.

If you start clicking on the names from Isa Drive's blog, you'll find many, many of them are reports of arrest; if you try to find out what happened (do a search on the newspaper archives, e.g.), you get nothing. The newspapers are reporting arrests, and not following up.

And we need to know. Before more bad things happen.
Posted by Saipan Writer at 6:00 PM 7 comments: Links to this post 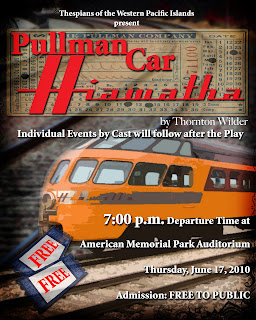 Besides the play, the Team CNMI Thespians will present their individual event pieces for their competitions in tonight's showcase.

(Nice write-up in the Variety.)
Posted by Saipan Writer at 10:14 AM No comments: Links to this post

Bad News: Another high school student assaulted. This time a teenaged girl on her way to morning classes at Kagman High School. I don't know the extent of the assault, except that the girl was taken to the hospital. Although this crime happened yesterday (Tuesday) morning, it was not on last night's news and is not reported in today's papers. My Kagman staff were discussing it this morning. One suspect was apparently brought in and released already. Another is being sought.

(EDIT: There is talk that the situation is like that of the girl in CK--a white pick-up truck, bashed on the head, raped. I haven't been able to verify.)

It's becoming extremely worrisome when teenaged girls are attacked in daylight near their schools, in public places.

It's also troublesome when the news isn't promptly reported. 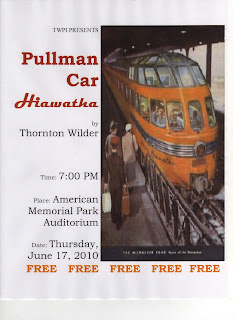 Good News: Also about students. Fifteen area students from grades 6 through 12 will once again be attending the International Thespian Festival at the University of Nebraska, Lincoln. They will attend workshops and plays, participate in college and scholarship auditions, compete in individual events and stage their own one act production of Pullman Car Hiawatha by Thornton Wilder.

They will showcase the stage play and their individual competition pieces (which also include technical theatre presentations in costume design, scenic design, and film) Thursday, June 17 at 7 PM at the American Memorial Park auditorium. The community is invited to support these students by coming to watch. The show is free.
Posted by Saipan Writer at 8:26 AM 1 comment: Links to this post

I've been too sick to think, much less post a blog entry. There's a cold (cough, congestion, exhaustion) going around Saipan. It seems wrong to get sick like this in Saipan, where it's warm and sunny year-round. Just wrong...
Posted by Saipan Writer at 9:52 AM 3 comments: Links to this post