I've written a fairly neutral evaluation of the proposal, posted it at MLSC's Day In Court Blog.

Having started my study of the subject with no pre-conceived notions and being open to the proposal, I'm surprised that I am now completely opposed to this amendment.

I've read a lot of what Bill Stewart has written on POBs and on the NMI Retirement Fund. I've also read news articles by proponents and checked a bit on other jurisdictions that use these.

THE NMIRF: I feel for the retirees and those still working but in the retirement system who have actually worked hard and given good service to the CNMI. They are at risk of losing their retirement because of the mismanagement of the Fund. Whether you blame the Fund managers directly or the Legislature for its faulty design of the system, or the Executive branch and autonomous agencies that have failed to pay their contributions as mandated by law, it's clear that the Fund is not adequate for the purpose of pensions for all those who are in the system--part of the DEFINED BENEFIT PLAN (DBP).

The problem will be limited in time, however, because new hires of the CNMI government are not in the system. They are now essentially on their own, with the option to create their own IRAs. Eventually, the last member of the NMIRF Defined Benefit Plan will die and the pension system will cease to exist.

The need to address this situation for those CNMI employees who have already retired as well as those still in the pipeline is critical. While there are and have been do-nothing employees who have gotten the benefits of the NMIRF, there are real people who have done their civil service honorably, too. The fiscal soundness of the NMIRF is important to each of these workers for their future. It is important to the CNMI for its integrity.

Nothing in my opposition to the proposed constitutional amendment denies my recognition of the importance of the CNMI in meeting its obligation to its retirees.

Pension Obligation Bonds: The problems I have with the POBs is that I think the benefits from POBs are significantly less than the costs. They will not fix the retirement fund problem completely, but they could bring the CNMI to the brink of bankruptcy and most certainly would weigh down the next two or three generations with staggering debt.

The proposal bandied about says $200million in POBs, but the constitutional amendment imposes no such limit. Anyway, the $200million figure would leave about 25% of the NMIRF liability still unfunded. And the pressure to use POBs for the rest would be great.

While the amount of the unfunded liability can be estimated right now, it can also grow. But more significantly, the constituitional amendment is written in terms of what the CNMI owes the NMIRF (not the real "unfunded liaibility" which is what the NMIRF owes its DBP members). There is no ceiling on what that debt can become. If the CNMI fails to pay again and again, that debt rises; and then there can be greater amounts of POBs. And the CNMI will owe so much on the POBs, and nothing will be protected.

I can't trust either our Government or the NMIRF to be fiscally responsible with a tool as dangerous and powerful as Pension Obligation Bonds when the past shows that both have been reckless and irresponsible with basic powers.

Even now, the Legislature keeps offering perks to retirees like double-dipping and early withdrawal without penalty. They have an interest themselves, as they want to get these benefits.

No--our children will already have to face the debts created by the government and NMIRF. If the Legislature thinks the POBs are a solution, they will do nothing to change. And the problem will not only continue, it will get worse, especially when we can't pay the obligation on the POBs.

We don't need to make our CNMI fiscal problems worse by borrowing money that MUST be paid back ON TIME. We aren't going to successfully borrow our way out of the NMIRF debt.
Posted by Saipan Writer at 6:45 PM No comments: Links to this post

I'm passing on the following informative message (below) from our current representative to the US Congress, Gregorio (Kilili) Sablan.

Besides the election for his position, there are also three CNMI Constitutional amendments on the ballot. You can get some information about them from the MLSC blog, Day In Court. They are HLI 16-13, HLI 16-18, and HLI 17-1 (post pending).

On Tuesday, November 2 the people of the Commonwealth of the Northern Mariana Islands elect their Delegate to the United States House of Representatives. It is an important election you should not miss.

Exercise your right to vote. Here’s how:

You are a registered voter if your name is in the voter list of the Commonwealth Election Commission. Click here.

Absentee Ballot
If you are registered voter who resides outside the Commonwealth, you must apply for an absentee voter ballot. Download the application form here. Then mail the completed form to:

There is NO need to notarize your completed form. Your ballot will be mailed to you. This is important: Be sure your application includes the address where you want to receive your ballot. The ballot cannot be forwarded to another address; and the Election Commission cannot provide a replacement ballot if you change the address you put on your application.

Registration
You must be registered to vote; and voter registration ends September 3, 2010. If you have never registered or did not vote in the last election, you need to register. On Saipan go to the Commonwealth Election Commission in Susupe (formerly the U.S. Passport Office). Bring a copy of your birth certificate, current United States passport, or naturalization documents. The Election office is open Monday to Friday, from 8 a.m. to 11 a.m. and from 12:30 p.m. to 4 p.m. Click here to download the Affidavit on Application for Voter Registration.

On Rota register with Ms. Lelanie I. Manglona or Ms. Josepha A. Barcinas. Tinian residents may register with Mr. Jose P. Kiyoshi or Mr. Donald M. Hofschneider. Residents of the Northern Islands register by contacting the Election Commission via the government radios maintained by EMO.

To register you must:

1. Be at least 18 years old on or before November 2, 2010;
2. Be domiciled in the Commonwealth;
3. Have resided in the Commonwealth for 120 days prior to the day of the election;
4. Not be serving a sentence for a felony conviction;
5. Not have been declared by a court to be judicially insane; and
6. Be either a citizen or national of the United States as defined in the Northern Mariana Islands Constitution.


For more information contact the Election Commission at 670-664-VOTE(8683) or info@votecnmi.gov.mp.

Remember: let your choice be counted.

Thanks, Kilili, for the clear and timely information.
Posted by Saipan Writer at 7:06 PM No comments: Links to this post 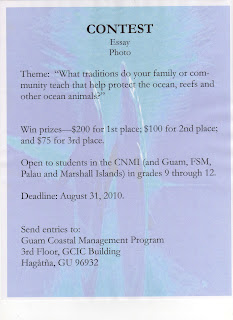 More details and contest rules are available through the Saipan Tribune's article here.

You can learn about the education and protection efforts of Guam Coastal Management Program at their environmental education website.
Posted by Saipan Writer at 10:44 AM No comments: Links to this post