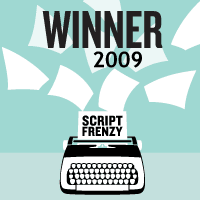 I've got 102 pages of script for a musical, an adaptation of my 2008 NaNoWriMo novel. The musical drama is called THE ALCALDE'S DAUGHTER. It still needs about 5 scenes to reach the end. (Yes, I know I can use the last 2 days of April to work on these, but I probably won't. I'll leave it for the summer, when I'm on vacation!)

And of course, it needs music. But not until I've sorted out the script and revamped the lyrics, which I drafted in the speed of SF without any real consideration to rhyme, meter, "scansion" or anything else.

The script is a glorious mess, but I'm writing about the period in Saipan when the deportees were here, 1875, and it's all thanks to the excellent history by Carlos Madrid, published by the Humanities Council. Of course, they would be quite shocked at the liberties I'm taking with history, but that's what fiction is all about!

Now, to celebrate. Not. I just really want to sleep.
Posted by Saipan Writer at 9:30 PM No comments: Links to this post

I just had a very unpleasant experience at Liberty Plaza. I have spent hundreds of dollars there over the past month, buying fabric and notions, and having costumes sewn for the Friends of the Arts production of MY FAIR LADY.

Today when I went to pick up the last of the costumes, I found that the seamstress had ruined my hand-painted fabric; had obviously ignored the drawing and written instructions I had given her; and had sewn something completely different. I had asked for a one piece, extra wide kimono-style dress. I got a two piece suit, with a very narrow skirt and short kimono style top.

The drawing I gave is shown below in my earlier post. It clearly shows that the kimono-dress is worn over a black skirt and high-necked blouse. The seamstress made the blouse for me, and fixed an existing skirt at the bottom for those parts of the costume.

When I returned this afternoon, the seamstress tried to say that she was following my instructions. Obviously, this was false. I repeatedly mentioned to her I had spoken to her personally and explained in great detail, as well as written on my sketch that the kimono needed extra gathers or something to make it wide. She also had my phone number, so I asked why she didn't call me if she thought the instructions were contradictory or ambiguous. (I didn't actually use those words--I said if you didn't understand...)

Instead of customer service and an apology, I was treated to being pinched in the arm very hard by this same seamstress.

Eventually, I got some of my money back, but not even all that I had paid for this outfit. I got tired of the argument as she and the other workers at Liberty all gathered around, telling me to lower my voice. They obviously didn't want other customers to know that they had a dissatisfied customer. But they also didn't seem the least bit concerned about the fact that they had 1) ruined my fabric; 2) cost me money and time; and 3) put me in a terrific bind for the show that is coming up.

The seamstress instead insisted that is was just a mistake. And after I got some of my money back,she'd kindly keep the suit that she had made.

What's up with that? I said I don't think so.

The real kicker is that after I left, she called the police ON ME! Yes, I was angry and raised my voice. I don't think that's a crime. But all along she thought I was a teacher, but today found out I was a lawyer. I think she called the police because she's afraid I would do something first and this is her way of "protecting" herself.

I have no intention of doing anything further, except blog about it.

And say I'd be really careful before using the seamstress services at Liberty Plaza. You just might get screwed.

You certainly won't get treated like a customer whose business is valued.
Posted by Saipan Writer at 5:03 PM 10 comments: Links to this post

Brief Reflections on the Trial of the Day

Ed Propst is reporting that the jury has already returned a verdict in the case against Lieutenant Governor Timothy Villagomez. According to Ed, guilty on all charges.

He says guilty on all charges in the cases against the co-conspirators, too. Confirmed. (thanks to Wendy for the cite).

I think we're all relieved. The rydlyme deal stank through and through, but that's not the same as being enough to convict on federal charges. There's also been a history of difficulty in getting guilty verdicts in cases involving corruption of public officials in the CNMI. We've seen others charged with cheating on construction contracts and such, and no convictions.

So I'm relieved that the jury was convinced by the evidence and strong enough to do what they found right.

I was most offended by the closing argument that included the phrase "choose the local mango." This was a thinly disguised attempt to turn back the clock to the time when being a Chamorro meant people owed you allegiance, especially against the US government. I'm glad that we have jurors who don't want a rotten mango at all, no matter what its origin.

I think the counsel for the accused (and now guilty) defendants seriously misjudged the mood of the jury and the people in the community. People are tired of powerful local politicians abusing their positions, enriching themselves, and causing the rest of us to suffer. Accusing Antonio Guerrero of being a patsy for the feds when he is just another regular guy being ill-used by them was incredibly offensive. The man was obviously working very hard to clear his guilty conscience. Describing FBI agent Dana McMahon as looking like a sheep but really being a wolf was another stupid ploy. She didn't testify and it was clear that the defendants were looking for any scapegoat they could get.

And the other closing arguments suggesting that the US federal government isn't "us" were also offensive. Just last November we elected a Delegate to serve in the US Congress. A record number of local men vied for the position--obviously not subscribing to the basic tenet that everything federal is bad. We're getting economic stimulus money from the US. We've been getting good press for our federally-declared national marine monument. We're heading into federal immigration and the US is respecting our wishes to have better dialogue and clear planning. We're seeing more US military in our neighboring island of Guam with spill-over tourism here.

Kudos to Eric O'Malley, who worked really hard and obviously came to court with his hammer and nails to close the lid on this mess.

(And if the reports of guilty on all charges are wrong or inflated, I still say kudos to Eric, and shake my head in disbelief and disapproval at the closing argument tactics of the defense counsel.)

Now we'll await sentencing. It's pretty clear that federal law will provide some real sanction for the wrongdoing, unlike CNMI law.
Posted by Saipan Writer at 7:54 PM 10 comments: Links to this post

Visit msnbc.com for Breaking News, World News, and News about the Economy

Visit msnbc.com for Breaking News, World News, and News about the Economy

EDIT: I've added the more I mentioned when I first put up this post.

So I'm not there. I wish I were. Friends of the Monument worked hard and deserve this national recognition. EPA Region 9 award. Wow! (And I'm honored to be the person who nominated FOM!) 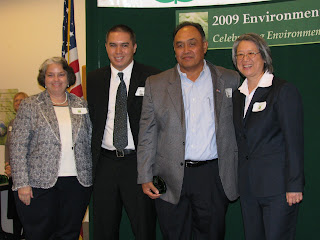 BTW, You can see the full list of 2009 EPA Region 9 award winners here.


Photo and video courtesy of Angelo O. Villagomez.
Posted by Saipan Writer at 12:01 PM 6 comments: Links to this post

Saipan Theatre News--As in, live theatre, produced by the Friends of the Arts.

MY FAIR LADY is scheduled for presentation on April 30, May 1, and May 2 at the Multi-Purpose Center.

I've been busy "designing costumes" for the production! Yeah, I know. A bit of a stretch for me. Especially since I'm a lousy artist. But just as a preview, here are my costume renderings for the show--some of which will be used (and some of which will not). 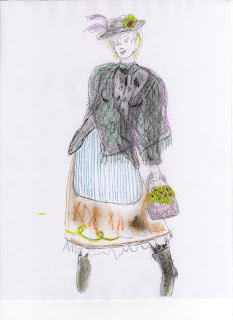 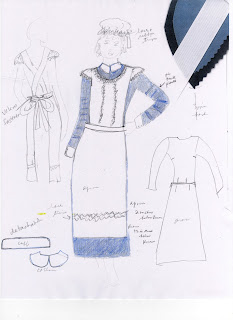 Maid(s) in the Henry Higgins household. 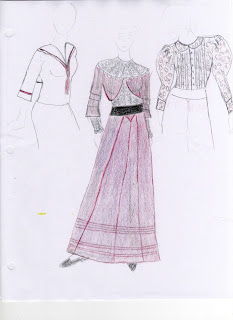 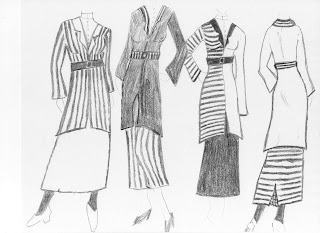 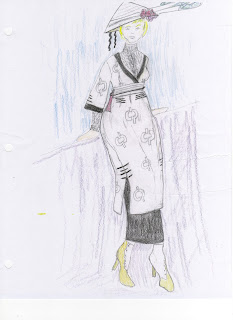 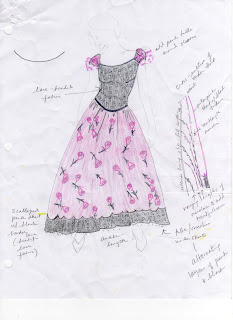 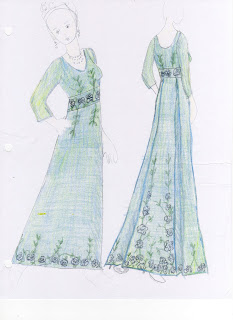 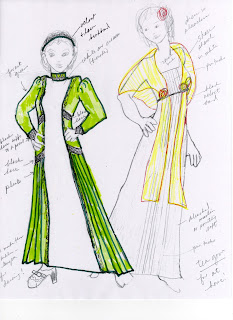 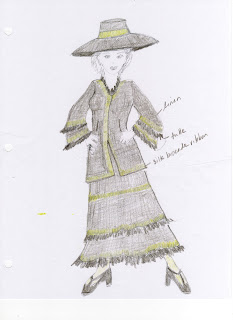 Eliza's "leaving" suit
MY FAIR LADY is a costume-heavy show, and this is my small bit. Obviously, there are a lot more costumes that I have nothing to do with... (the men, for example. They will have clothes in the show, honestly.)
I've also helped with hats, hats, and more hats!
We are having a lot of [fill in the adjective] getting ready. Hope you all will come and see it.
Great music. Great story. Great fun.


Please remember, everything on this blog is protected by the Creative Commons License. Click on the icon in the sidebar for more information. Thanks.
Posted by Saipan Writer at 11:46 AM 7 comments: Links to this post

(He's got some other clips on You Tube, but he sings on them. I don't like those.)

And here's a clip posted by Alvin Bodic of the "Feel Good Vibe"--love the music, not quite sure about the vocals. There's an effect there, though, so yeah...

Posted by Saipan Writer at 5:49 PM No comments: Links to this post

I received an e-mail from Mary Parker, who said that she is writing a story for Stars & Stripes on Nanowrimo/Script Frenzy here in the CNMI and in Guam.

If you've participated in Nanowrimo or SF, and want to give your feed back for her story, you can reach her at mary at theparkers dot org.

If you haven't participated, it's never too late. April is Script Frenzy month. Join now! Write 100 pages of script on your movie or stage play or manga/graphic novel or whatever! It's a blast, a mind-wrenching, soul-bruising, but nevertheless radically fun endeavor.

Posted by Saipan Writer at 3:22 PM No comments: Links to this post

...you repost someone else's great photo.

I'm swamped at work. I am also trying to write a 100-page musical stage play during April as part of Script Frenzy. And there are lots of other interesting things going on here, from politics to daily life. 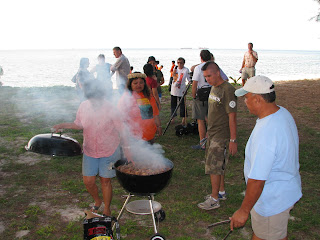 Here's a photo from Angelo of the picnic at the beach when then NBC crew was here for a story on the Marianas Trench Monument.
It's iconic--Agnes McPhetres, Jacinta Kaipat, Angelo Villagomez and Ike Cabrera--the working heart of the pro-Monument movement, still at work, grilling at the barbecue! In the background, you can see me and Stacie (Ruth Tighe's daughter) talking with Ian Williams of NBC; Anna Rose talking with Won Chomchuen of NBC, Mike Tripp with the photographer Ian, Ruth Tighe (serious) and Ken Kramer (smiling), and kids in orange tee-shirts playing at the beach.

For me, this photo sums up the Friends of the Monument experience!
Posted by Saipan Writer at 9:29 AM 1 comment: Links to this post