There are more and more untended places around Saipan. The population is dwindling and nature is covering tracks.

Here are some photos of wildflowers and weeds. If you know the names of any of these, please tell me in the comments. 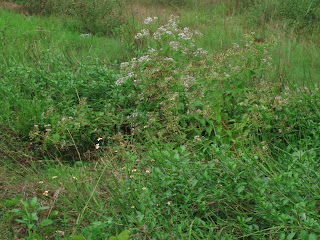 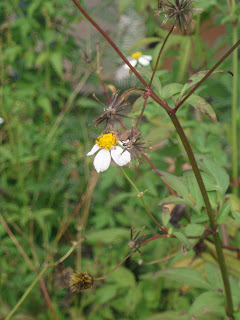 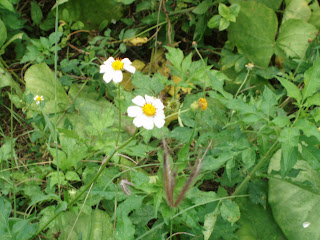 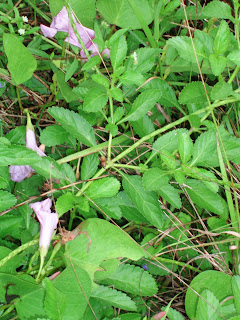 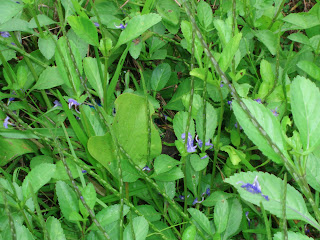 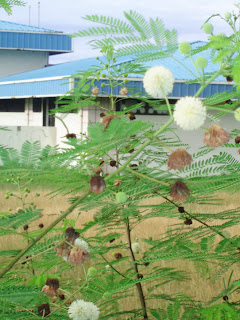 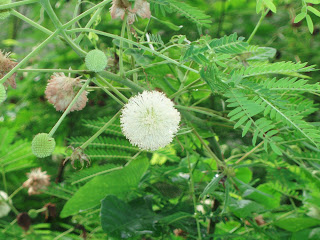 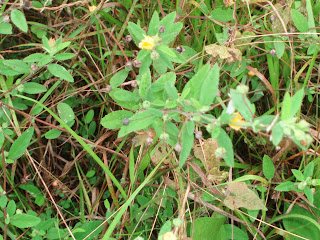 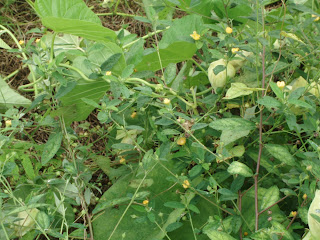 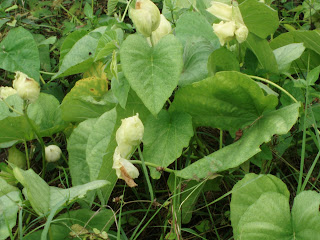 Posted by Saipan Writer at 7:05 PM No comments: Links to this post 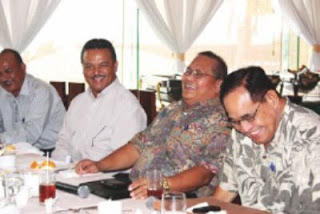 When I say this photo on the front page of today's Saipan Tribune, my first thought was "why are these men smiling?" Don't they realize that the CNMI is in dire straits? Don't they have any sense of forboding? Aren't they the least bit concerned about the gravity of the situation?

I was at Java Joe's and chatting with Tina Sablan and Glen Hunter. Of course the Governor, Lieutenan Governor, Senators are smiling...they've just spent hours in a swank hotel.

Five hours of "leadership" meeting on the economy and they didn't have the good sense to use a government building? They had to go to a hotel? Who paid for that? Was there any bidding for this government expense or is our governor just friends with the hotel owners?

I really think the elected officials have completely lost touch with the realitiy on the ground. Their focus is on their own political hides.

Governor Fitial is a Republican again. This is his strategy for saving his political skin. (And writing a letter in support of Tom Delay, another "good" Republican."

The others are slapping each other on the back, grinning, "cooperating," and trying to convince themselves that they belong in the political fraternity where they can enjoy the perks of privilege.

What came out of the meeting? We have only a few details.

There will be $6.2 million pumped to travel agents to encourage tourism here. $100 paid for every tourist from Osaka and Nagoya during low peak times. Aren't all times low peak just now? Will this really be enough to stimulate travel? Are we going to get our money's worth? Can we afford it? This doesn't sound like a terrible idea, but how long can we buy our tourists? And what will the actual proposed legislation look like?

There was some mention of reprogramming funds and looking at "lapsed" federal grants. The first is always dangerous and usually means less control by the Legislature and more power to a Governor who has already abused his power repeatedly. The second shouldn't take a summit of leadership to consider. We apparently have federal money available to us for a number of projects that we have not spent, which Kilili has pointed out.

While the governor is concerned about ending the austerity measures, no one is talking about the need for new thinking and lifetime commitment to austerity, to frugality, to a balanced budget.

Our leaders continue to look for pie-in-the-sky solutions. They want the big kahuna to come in and give us money, no strings attached. That big kahuna could be casinos or crime and they wouldn't care, as long as the price was right. There is no thought for ethics, for principles or community values. And when any prospect appears that might look like the desired solution, there is an immediate blindness and unwillingness to look closely--just the usual grasping at straws.

We will continue to sink with this "leadership." They will continue to smile because they are clueless. As long as they can eat nice lunches and meet in luxury hotel rooms and be fawned over by people impressed with their position and power (big fish in a tiny fishbowl), they will remain out of touch with the reality in the community.

And that's a shame because they are also blind to the talents and resources of our people. The leadership might bash foreign workers when they're in the mood to cater to certain voters, but they don't really see the value of any of the people here--local, haole, and foreign. They are unaware of talents they can't recognize--like education, like visual or performing artistry, like the analytical/scientific mind, like the practical laborer. All they care about is whether they will continue to get elected and have money in their own pockets.

And so they are still smiling.
Posted by Saipan Writer at 7:57 PM 7 comments: Links to this post

I have been swamped with work and life! Thus, no blogging for such a long time! And as a result, I've been getting more than my share of spam. So I've enabled word verification on comments. I think this is a nuisance, but hope you understand.

It's a new year. Wishing everyone peace and joy for 2011.
Posted by Saipan Writer at 8:30 AM No comments: Links to this post