From the North Star

I read this "viewpoint" in the North Star (the CNMI's catholic newspaper), published 10/10/2010. At first I thought it was written by someone in Saipan!

Then I hit the phrase "spending money on doughboys" and wondered if this was from the WWI era.

But no...from the bottom of the column, I learned it's from a 9/30/2010 Rhode Island Catholic newspaper. In Rhode Island,
"doughboy" is defined as "No relation to the Pillsbury softy, the Rhode Island doughboy is typically a big square of pizza dough that's deep-fried and dusted with sugar."

Change this phrase out to sashimi platters or cases of Bud, and the "viewpoint" hits home! 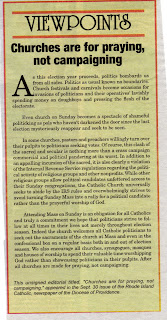 I've heard tell from various people about Jesus Borja campaigning at a funeral in Tinian and Juan N. Babauta at a recent funeral here in Saipan. I'm sure that the other candidates may be tempted to engage in this conduct, too.

I just wonder if any of the candidates actually read the North Star--and will have the decency to desist.
Posted by Saipan Writer at 2:55 PM No comments: Links to this post

The relevant constitutional provision of our CNMI Constitution reads:

If a balanced budget is not approved (by the legislature) before the first day of the fiscal year, no money shall be drawn from the General Fund, provided that certain government services and employees shall remain available as provided by law, in order to deliver services essential to the health, safety, and welfare of the people of the Commonwealth and to protect against damage to and destruction of property.

The exact contours of this provision are now being tested by our current situation. And the limitations and protections of this provision seem to have already been stretched beyond reason and good sense in service of political motives.

1. The Saipan Tribune reports that Attorney General Ed Buckingham has used and is using public funds to hire a private attorney to represent him in the OPA investigation into his use of public office to support federal election (House of Representatives) candidate Joe Camacho. The hire of attorney G. Anthony Long occurred on September 17, 2010 --so predates the constitutional restriction on expenditures of public funds. But now the question becomes whether the continued services of Mr. Long can possibly be considered "essential services" during this government "shut-down." The answer seems obvious--NO! Legal services to cover Mr. Buckingham's ass in the investigation are not vital to "health, safety, and welfare OF THE PEOPLE."

No time that Mr. Long puts in from October 1, 2010 to the enactment of a budget should be billed to the public or paid for with public funds.


2. The Marianas Variety reports that Deputy Police Commissioner Ambrosio Ogumoro told DPS supervisors during work hours in a meeting to have their subordinate police officers bring food to a political gathering for US House candidate Joe Camacho. Almost worse than this political pressure is the report that police officers, while on duty, "delivered picnic tables, cut fish and helped in the preparation" for the political gathering.

Helping on a political campaign is not essential service for the "health, safety, and welfare of the people of the Commonwealth."


We need a full investigation of both of these. We may need a lawsuit challenging expenditure of taxpayer funds in derogation of the Constitution. And for this, we need leaders to take the lead. They must step up and insist on behalf of all of us that the tyranny end; that our rights be protected; and that our government remain and return to democratic principles.
Posted by Saipan Writer at 12:37 PM 2 comments: Links to this post 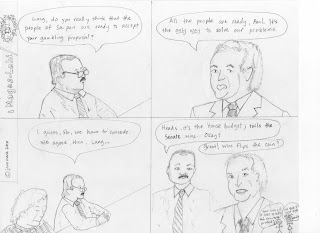 Posted by Saipan Writer at 11:42 AM 7 comments: Links to this post

The Sky Is Falling! 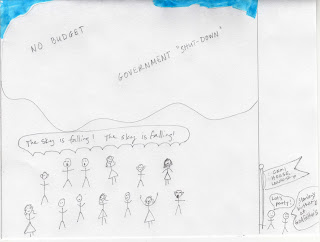 Posted by Saipan Writer at 12:30 PM No comments: Links to this post