Immigration -- There may be a court challenge to the CNMI's recent enactment, P.L. 17-1. If you are an alien in the CNMI or an employer of foreign workers in the CNMI, and you want to join forces in challenging the law, you might see a lawyer now. Low income persons can apply for help at MLSC. Others with middle or more income could check private lawyers like Mark Hanson, Rob Torres, Steve Woodruff, Colin Thompson, Richard Pierce (or any attorney of your choice).

CNMI politics--Still as disruptive as ever. The AG's office seems to be an arm of the Governor's Office, rather than an office serving the interests of the people. I now favor an independently elected AG. I worried that this would only make the office more political; but it now seems to be so political that "more" is impossible. I worried that legal work is not well-understood by the community and the opinions publicly stated would often lead to unconstitutional and unfair results; but the office is being used for unconstitutional and unfair results in the hands of the Governor, without accountability, so the people may be a better choice! I realize that the people re-elected the Governor, so there is little likelihood of real improvement with an elected AG; but it is remotely possible that such election would provide a measure of independence that is currently not present, and that would be healthy.

The CNMI budget--We're going to see the new CNMI Constitutional provision in play this year, and it won't be pretty. Governor Fitial will have a proposed budget by April 1. But the pressure on the Legislature to pass a budget by October 1 may force concessions no one likes.

Some ideas for what our CNMI Legislature could be focusing on now:
1. We have too many government employees--and the cuts should be at the top first, where expense is greatest. Constitutional protections may apply to those in office, but if our CNMI Congress would pass legislation now that lowers these salaries, we will at least see savings in the future. Do it!
2. They could change to a part-time Legislature. And eliminate the municipal councils. We don't need so much government. We can't afford so much government.
3. They could LEGISLATE a list of essential public services, so that the Governor cannot unilaterally decide who gets money and who doesn't based on his own preferences, all under the guise of what is essential, if and when the budget doesn't pass. No more continuing resolution.

We want a rational process, not unmitigated and unrestricted politics.

Community--The SSHS Manta Ray Band concerts on 3/26 and 3/27 were a success. Great performances, reasonably good attendance, successful fundraising. Just one small complaint: fundraising should be transparent. When you've set a specific goal ($140,000) for your trip to Carnegie Hall, you should be telling and showing exactly how close you are to the goal, on a regular basis. You shouldn't dodge specific questions like 'how much more do you need to reach your goal?'with vague assertions like 'we're close.'
Posted by Saipan Writer at 12:20 PM 5 comments: Links to this post

This morning-dark grey clouds everywhere, but still sunshine. White birds en masse circling above the trees by the beach. Lots of coconuts and pugua presently available. The first small mangos now being made into coco.
_________________________________

While the Variety's headline news concerns the first big gaffe, I mean bill, passed by the CNMI Legislature (trying to continue CNMI control over alien labor), the real news is the US Congress's passage of health care reform.

Angelo has a blog post that captures some of some of the color of the process and the final passage excitement.

Understanding this new law will take effort and lots of reading. Some resources:
New York Times questions and answers.

Saipan Tribunearticle and what's in it for the CNMI.

As for me, I'm glad that some health care reform passed, but it will take a lot more work and focus to bring this to realization, all the while the Republicans will continue their efforts to undermine it.

Democracy is strange at times.
Posted by Saipan Writer at 9:32 AM No comments: Links to this post

Angelo has put up a great post on the D.C. trip by Friends of the Monument to support Kilili's bill.

This coming week we have WESPAC in Saipan for one of its meetings. They want to hear from fishermen, because they're all about fishing.

The ocean is ours to protect, so it's good to read up on these things and do whatever we can. If we overfish, we won't have any fish in the future, and our oceans are already dying. It's important to stay informed.
Posted by Saipan Writer at 9:42 AM No comments: Links to this post

I've written another lengthy blog post with legal analysis, this time about the power struggle over umbrella permits, at the Day In Court blog.

In Labor, On Labor

I've written an analysis about Jacinta Kaipat's latest ploy to have our CNMI Legislature enact hiring "benchmarks" to "prioritize" hiring U.S. citizens. It's posted at the MLSC blog, DAY IN COURT.

EDIT: Link now working. The link to the original Marianas Variety article in that post doesn't work just yet, but I'm trying to get that fixed. (You'd think it would be easy, but alas--computer issues today.)

The federalization of immigration brings with it a host of changes, including the need to change our thinking to equal opportunity, non-discriminatory employment practices. Obviously, some people are having a much harder time letting go of the past than others.

Eventually, though, I think we will have a community that is more self-sufficient than at present. I think we will have more opportunities for better jobs for everyone here. I hope that what foreign workers we have in the future will have rights and jobs that pay for the value of their services. This will all take some committment to free and fair enterprise.

If we build our community on values that embrace equality, freedom, environmental protection, and human dignity, we should be able to surface, breathe, and rescue ourselves from the current precarious, drowning situation we are now in. At least, that's what I hope and believe.
Posted by Saipan Writer at 7:00 PM No comments: Links to this post

I put up a lengthy post about Victims of Crime rights and remedies at the DAY IN COURT blog.

Basically, there are some meaningful rights and remedies in the states and territories, including Guam, but not in the CNMI.

Here, we have Karidat, a private agency, pulling its weight and more; but this is not enough. We need remedies available through the US Department of Justice Office for Victims of Crime. But to take advantage of those remedies, we need a Legislature that will pass the needed laws and appropriate funding for a real agency.

Here is a chance for us to start trying to push for more help for victims of crime. 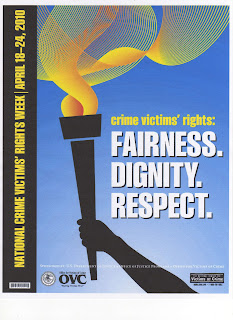 Posted by Saipan Writer at 6:42 PM No comments: Links to this post

I'm very slow at getting these posted, but here are some photos from the small party held in honor of P. Fred Kluge. Fred is a writer and professor at Kenyon College (Ohio). His connection with Micronesia goes back to the Trust Territory days. Party was at the residence of Jim and Florence Kirby. 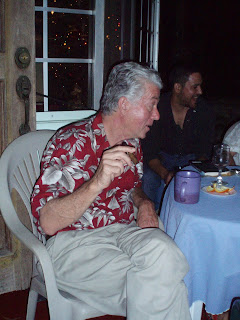 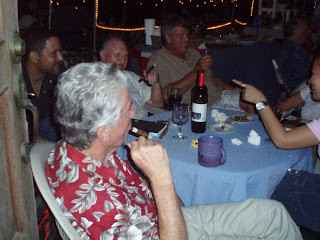 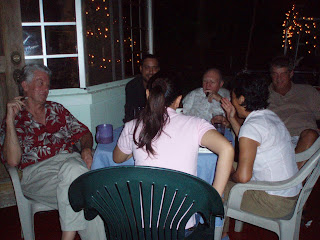 Fred is a journalist and novelist, but my favorite piece of his writing is the non-fiction book, EDGE OF PARADISE, about Micronesia and the movers and shakers in the days of the break-up of the old Trust Territory of the Pacific Islands. 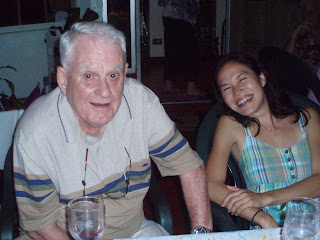 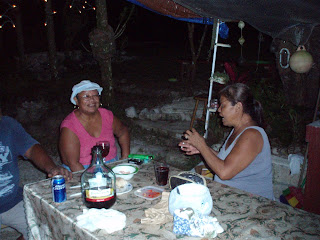 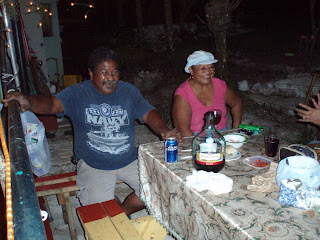 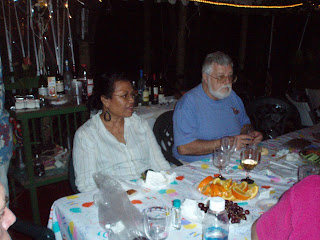 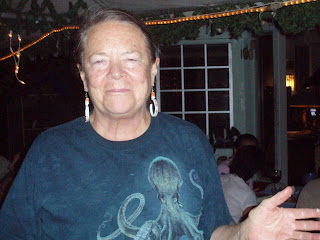 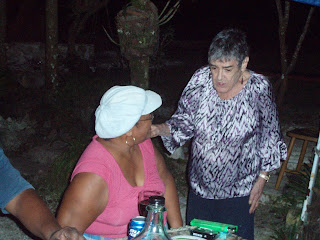 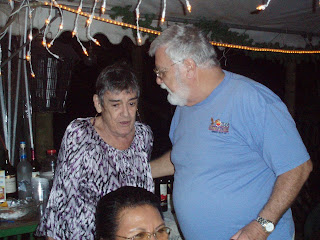 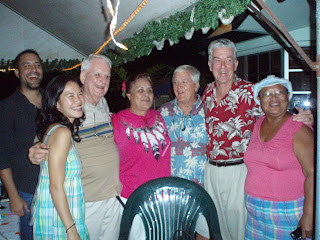 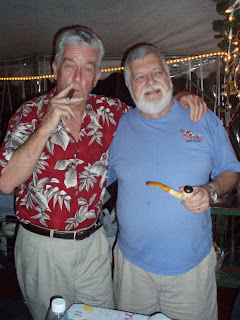 At one point, Jim brought out his copy of EDGE OF PARADISE, a first or early edition that has been badly eaten by termites. Jim hangs on to this because it is unique--on his travels through the old TTPI, he sought out all of the people mentioned in the book, and has signatures from them in it. 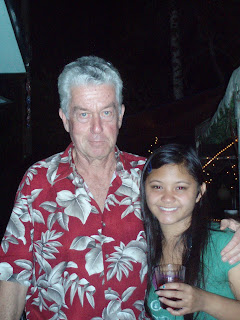 Posted by Saipan Writer at 9:35 PM 2 comments: Links to this post

Bright and sunny now. It rained yesterday morning and there was a lovely rainbow in the southwest. I saw a single yellow sulphur butterfly while driving on the road near NMC and remembered the past, when there would be clouds of them "crossing the road" at times.
____________________________

The SSHS Manta Ray Band is looking forward to springtime in New York City. They will be there from April 17 to April 21, 2010 to participate in the New York International Music Festival. They have a busy schedule in that short time.

Their two key performances will be on Monday (late morning/afternoon?) at Central Park bandshell and on Tuesday at 2 PM at Carnegie Hall. The second performance is an adjudicated event; if they do well (and we are hopefully confident and confidently hopeful), they may win awards, which will be presented after an 8 PM evening show performed by Stockton California musicians (the San Joaquin Delta College Symphonic Band and the Stockton Wind Ensemble).

If you are interested in tickets to the Carnegie Hall events (2 PM performance, evening awards), you can get tickets at the Carnegie Hall Box Office. No cost for the afternoon performance; $20 for the evening show.
Posted by Saipan Writer at 4:04 PM No comments: Links to this post

This article, published in the New York Times by a Greenwire writer, gives more publicity to the NMI's position on the National Marine Monument.