The CNMI's Sex Offender Registry is now on-line. To get to a listing of sex offenders in Saipan, you take these steps:

1. agree to the terms of use
2. click on geographic search
3. type in the verification code that appears
4. in the geographic search area type in zip code (96950 for Saipan; 96951 for Tinian, 96952 for Rota) and click on the button to show within zip code
5. presto-a listing appears

I would encourage everyone in the CNMI to check out the listing.

If you are a parent, watch out yourself and show these to your children who may be vulnerable (provided they are mature enough to understand).

If you are dating, avoid these men. [I know-perhaps there is a gem in there who has recovered, but... We haven't yet learned how to address sexual offenders--we don't know the causes of their problematic conduct; we have limited-to-no success with rehabilitation; we see a lot of recidivism among this category of criminal offender. And sometimes there are years between episodes of criminal conduct.]

If you are a teacher, care-giver, concerned citizen, member of this community--watch and pay attention.

It's good we finally have a listing and some photos to go with it, and some publicity about this development. It isn't perfect--there are listings without photos; lots of listings where the criminal offense is missing [Hattori, Hernandez, Ikesil, Ilisari, Kaipat, Kosam, LImes, Lizama, Omar, Rabauliman, Reklai, Rios, Marce Romolor, JR Sablan, Santos, Sikyang, Taisacan, Taivero, Tamag, Tarkong, Valdez, Wisewell, Yamut). In the geographic search, Bamba shows up on the Saipan list, but he's in San Jose, Tinian; Iano an dAtalig show up on the Tinian list, but they're in Rota. --Kinks in the data input.

Some of the offenders are listed as "absconded"--meaning they have failed to register and there present whereabouts are unknown. They could be here or have left.

No doubt, also, there are other sexual predators who are not on this list, so there is no room for complacency.

Still, we are making progress in protecting our community and this on-line listing is one step in the right direction.
Posted by Saipan Writer at 12:15 PM 3 comments: Links to this post

I've lived in Saipan for more than 25 years, and I've been to approximately three Liberation Day parades, before today. I don't much like crowds and heat, and the 4th of July festivities usually involve both. Today, I went to support Anna Rose and the rest of the Saipan members of the Pride of the Pacific marching band. Anna Rose plays trombone in the SSHS Manta Ray Band (advanced band 1). 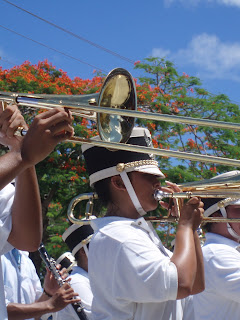 The parade hasn't changed much in the 25 years since I've been here. There is still a shanty-town of plywood booths for the "festival" across the way. There is the temporary parade stand (elevated platform resting on old barrels) in bunting (typically plastic now, rather than palm and pandanus). The police lead off with motorcycles, a color guard and cadets. But there is no longer a bull pulling an oxcart. 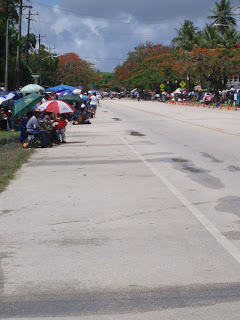 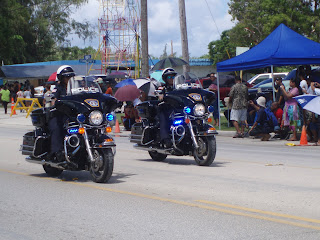 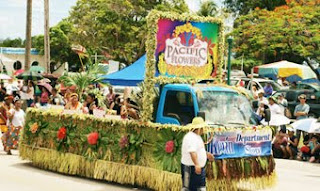 This summer, students from all levels of the Manta band, including those already graduated from school and now "former" members, and musicians from the Pacific Winds joined forces with Guam musicians to create an ad hoc band to march in the parade. Approximately 25 musicians from Saipan participated in the parade performance, including Atsuko Eck (on the small saxophone), who blended in with the students! 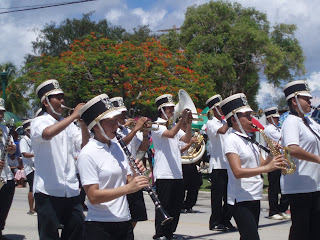 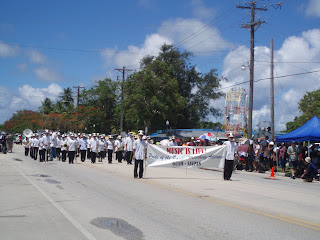 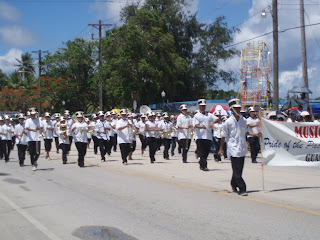 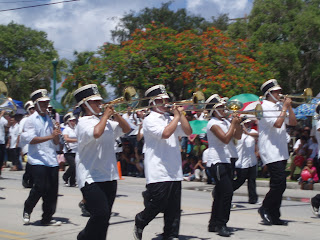 The musicians marched along beach road in the parade route from Saipan Office Supply to Kristo Rai Church. It rained at 10 AM, the parade scheduled start time. Then the sum came out and created a scorching steam bath from the water just dumped by the passing clouds. It was hot! 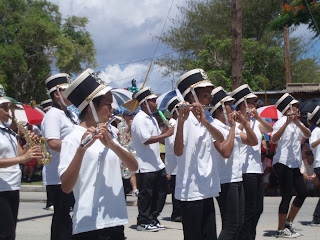 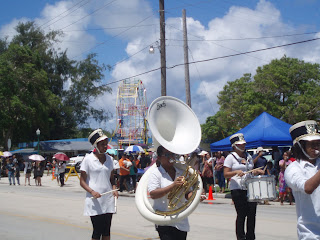 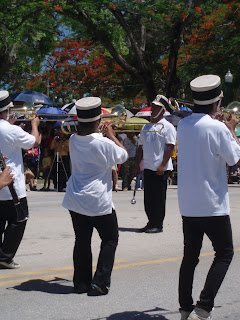 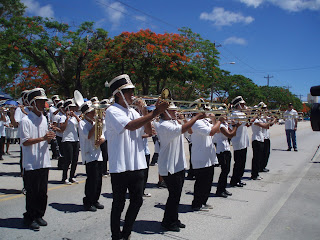 The band sounded great. When they got to the shaded platform for dignitaries and did their little special marching drill and playing, they maintained their formations, kept beat, and just did a great job. 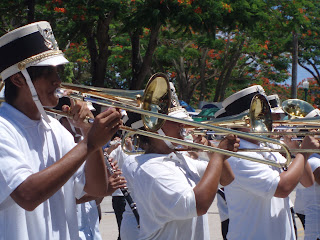 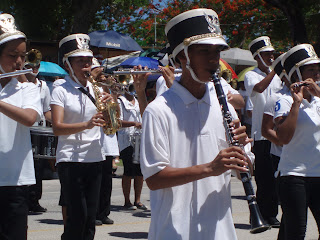 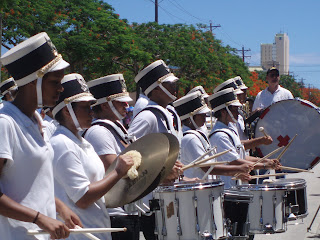 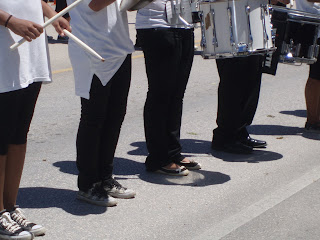 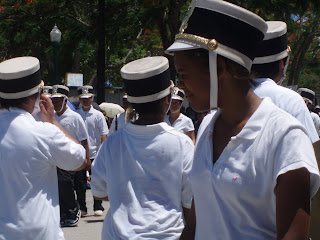 Afterwards, they posed for some photos, cooled off in the shade and drank a ton of water. 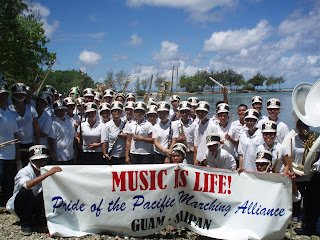 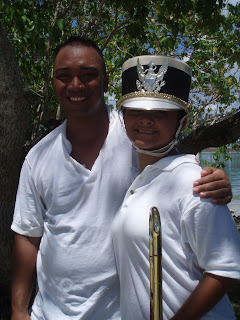 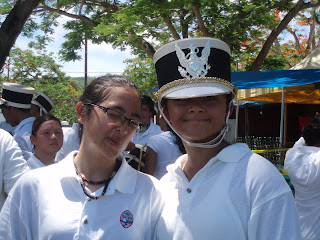 The performance was the first time a "home-grown" marching band has performed in the Saipan Liberation Day parade.

They had learned their marching drills in about 3 days time--working from 7:30 AM to 6:30 PM, practicing their formations at the SSHS parking lot. 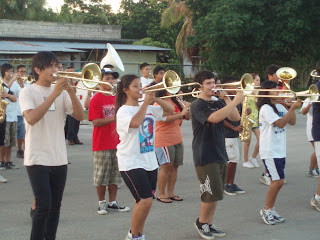 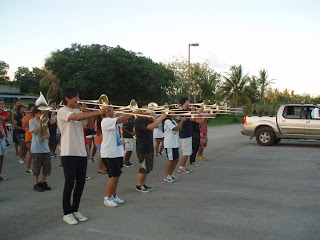 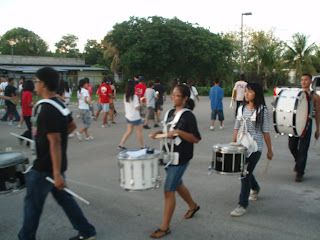 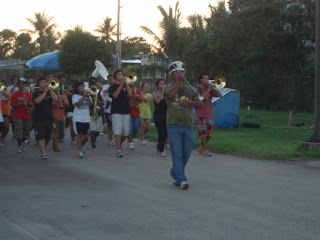 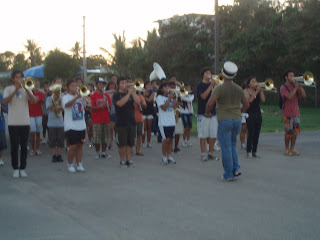 I'm reallly glad Anna Rose and the other students had the chance to do this. Thanks to Will deWitt, Max Ronquillo, and especially Jayke Mafnas for working with our students on this new endeavor.

And back at the parade grounds--I didn't stay for the rest. I had seen the color guard, the police cadets, and the JROTC. The Neighborhood Watch, in their green shirts, followed the band, and were waiting to get into the shade. As I was leaving, I heard the Falun Dafa group, with their gongs and music. But it was hot, so I headed for some air conditioning and a nice, tall glass of iced tea.


EDIT/ADDENDUM: A big thank you, dangkolo si yuuse maase, ghilisou, to the Beautify CNMI team who cleaned up.
Posted by Saipan Writer at 7:58 PM 7 comments: Links to this post