Milk-the last of an era 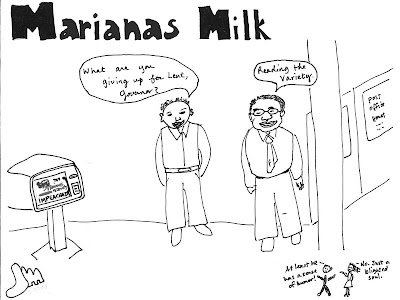 When I drew this cartoon, I had no idea that Governor Fitial would resign.  I was inspired to create this because of the tradition during Lent to "give up" some pleasure or activity as a means of self-sacrifice.  I thought it would be funny to think of Governor Fitial "giving up" reading the Variety. It has, after all, called for his impeachment or his resignation for years now.

I also submitted several other cartoons, now untimely--the Governor sending Valentines to the Senators (as a means of wooing them to vote against impeachment), the Governor on-stage in an opera scene handing a bouquet with extra dollar bills stuffed into it to the Gotterdamerung maiden representing the 18th Senate, and a comparison of the new year of the snake with our new year to impeach--lots of fireworks and a chance for a new beginning.

With the resignation, Benigno Repeki Fitial is no longer Governor.  I am hopeful that the need for the stress relief of political cartooning will abate.

Things already seem better with Governor Eloy Inos--he has at least renewed the contract of Alan Fletcher at CUC. Fitial was so intent on monkeying around at CUC that we lost an able director (Abe Utu Malae) and were on the verge of losing Fletcher, also educated and experienced in utilities management.  Fitial was obviously upset with Fletcher who refused to back the very-hinky contract with Saipan Development LLC. Inos understands that CUC must have SOMEONE in charge who knows something, and if Fletcher leaves, the vacancy will be horrible.

There there is the arrest finally of Joseph Crisostimo for the murder of Emy Romero is reassuring.  Although the DPS and AG assure us that the long delay (more than a year since her murder) had nothing to do with Governor Fitial or his political pressure, you still have to wonder why it took so long when we were told last October or November by Joey San Nicolas that the lab reports were back and there would be an announcement imminently--and yet it took 3+ months to make that arrest! And coincidentally it happened only after Fitial left office.

I am so relieved that Fitial is no longer our Governor.  Fitial at least got it right in his letter of resignation-his stepping down is good for our community.

Posted by Saipan Writer at 9:40 PM No comments: Links to this post

﻿﻿﻿﻿﻿
﻿
The news is rocking the CNMI. Few among us expected Fitial to quit without a fight in the Senate, and some of us thought he might actually "win" in the Senate and hold on to his governorship.  For Fitial to resign after his impeachment brings a "new tomorrow."

Inos, from Rota, and Hofschneider, from Tinian, also make history. For the first time in CNMI history (and possibly a feat not to be repeated), we have an executive team which does not include a person from Saipan.  Given that the vast majority of the Commonwealth's population resides on Saipan, having our two top executives come from very small minority communities significantly changes the dynamics in the political arena.

Each man, in his brief remarks after the swearing in, spoke of the need to work together.  They both sounded sincere.

There is no question that the feeling in the jam-packed Multi-Purpose Center was hopeful.

I sinceerly wish them both good luck.
Posted by Saipan Writer at 3:13 PM No comments: Links to this post

Another editorial cartoon from last week. 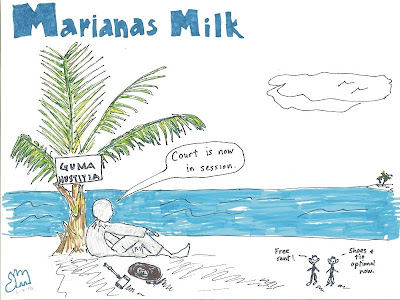 This was another flight of fancy considering what would happen if the NMIRF actually foreclosed the Guma Hustitia.  Court in session with judge sitting under a young coconut tree at the beach.

Posted by Saipan Writer at 8:03 PM No comments: Links to this post

These were published by the Variety on the dates mentioned, but not in the order in which I prepared them. And of course, there is always a lag of time between an event, my art, and then submission and publication. 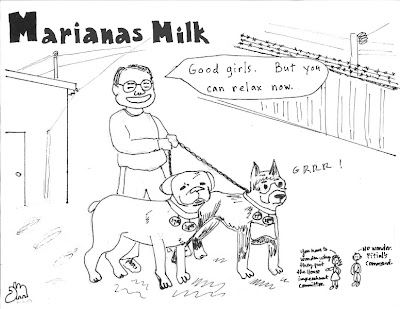 In a surprise move, the Fitial supporters (now the House minority) resigned from the impeachment committee. This was principally Teresita Santos and Felicidad Ogumoro.  This cartoon was inspired by wondering why they would do that. Well, really, it had to be because they are loyal guard for the governor and he told them to.  So I show them as junkyard dogs and Governor Fitial reining them in.  In my original, I had labeled their names on the dog collars, but MV eliminated those. They did leave the dog tags showing both 17th and 18th House membership.

The little people simply state the obvious--why would they resign?  No wonder, though, really. They resigned because they were told to.

This is possibly bad news.  Instead of trying to obfuscate or gain time or drag things out or any other tactic to fight in the House, the Governor now seems in a hurry to get to the senate. That can only mean he thinks he's got the senators in his pocket already.

I'm a little behind on my blogging--a week without my laptop, and then just a lot to do. But now I have a chance to catch up. 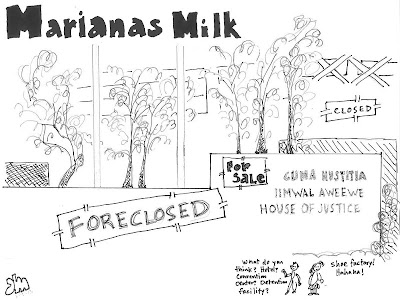 The newspapers reported that the CNMI government owes a huge amount to the NMI Retirement Fund on the loan for the Guma Hustitia (the house of justice, namely our court house).  NMIRF issued a notice of default and warning that they would foreclose on their mortgage.

This cartoon is a quick sketch of that possible future, with the little guys wondering just who exactly would buy a foreclosed court house!

My original had some color on it, which I think made it nicer, but the Variety published in b&w, even online, so this is the e-version I have.

Posted by Saipan Writer at 7:33 PM No comments: Links to this post 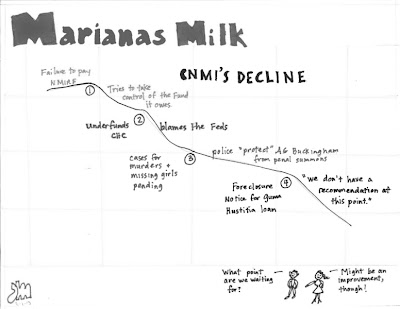 I loved Larissa Larsen's comment about the NMIRF's notice of default and warning of possible foreclosure on the Guma Hustitia.  She said "We don't have a recommendation at this point."  Translated--we don't have a clue what we should do! OMG!

Eventually, the CNMI government suddenly came up with a million dollars to hand over to the NMIRF.  Just where does it get this money when it keeps saying it can't pay?  This has happened over and over again under Fitial. It's like the money is a game... But of course, we're not having any fun.

I don't really like this cartoon. I think it lacks finesse and that special quality (conciseness, visual appeal) that is the hallmark of effective political cartooning. But I'm glad I commemorate and preserve the inanity of the Fitial administration's responses to some of the issues that have occurred.

As the little people say--just what point are we waiting for before we make some suggestion?  But then, since the responses have been so bad, maybe doing nothing would be an improvement!

Posted by Saipan Writer at 8:26 PM No comments: Links to this post 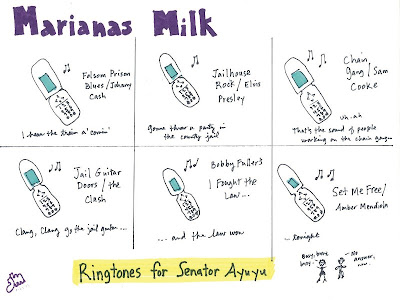 This was a fun exercise to commemorate the discovery that Senator Ayuyu had been caught in jail with a smuggled cell phone.  These ringtones could be heard on his phone, or they could be used as the ringtone on his friends' phones to alert them that he is calling!

It's worth listening to the music again...That's better than pondering that we are STILL paying the salary of "senator" Ayuyu.  Even while he's in jail!  only in Saipan...

Posted by Saipan Writer at 9:27 PM No comments: Links to this post 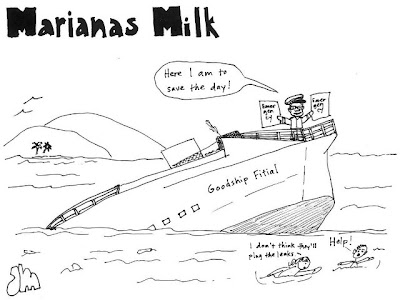 The CNMI has been sinking for the entire six years of the Fitial administration, but it has never been in as bad shape as in 2012.  Fitial continues to issue "emergency" declarations to bludgeon autonomous agencies into his control and to hide his wheeling and dealing from the public bidding, open procurement process required by law.  In 2013, one month into the year, we already have had two emergency declarations "renewed"--as if there is really any emergency! These are nothing but declarations that say I'm incompetent and these agencies are completely dysfunctional.  We continue to sink and the emergency declarations are doing nothing to plug the leaks or repair our vessel.

I forgot to mention--I heard the Mighty Mouse theme song in my head when I wrote the caption for Fitial.
Posted by Saipan Writer at 12:26 AM No comments: Links to this post